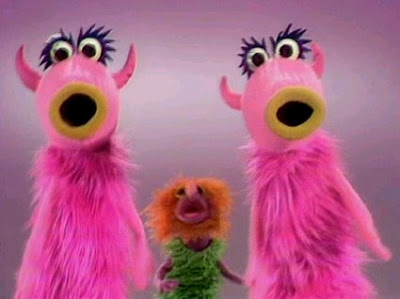 I’m obsessed with Mah Nà Mah Nà. My first exposure to this song was through The Muppet Show when I was younger, but recently an episode of The Sarah Silverman Show had two of the characters singing the song after the uncanny resemblance of the phrase “Banana Cop” to “Mahna Mahna.”

So of course I immediately ran to the internet for a fix. [Note: click the links to see various videos of the song.]

Surprise surprise, Mah Nà Mah Nà can be traced much farther back than The Muppet Show. The song was actually written by Piero Umiliani and originally appeared an Italian film called Sweden: Heaven and Hell around 1968.

A couple years later Henri Salvador recorded a version that sounds almost identical except for the fact that he wrote some lyrics to accompany the nonsense lyrics in the original. I’m not a fan of this version, so lets get to the good stuff.

Now, for brevity, I’ll gloss over the version released by Dave Pell, and the use of this song on The Red Skeleton Show. But if you’re interested in an exhaustive history, check out Wikipedia.

Instead, I’m going to jump right to my favorite versions. The song originally aired on Sesame Street, but I like the later version from The Muppet Show better (even though it’s pretty much the same thing).

Finally, the catchiest version is by far, by Cake.

And here’s a hilarious version where Kermit goes to see Dr. Sandra Bullock because for some reason, whenever he says the word “phenomenon,” strange creatures appear.

Not enough? How about a Heavy Metal version by Skin? Or a pop version by a British girl band named Vanilla? Oh, I know. The disco version by Lipstique!

Okay, how about a version on a Moog synthesizer by Hot Butter?

I wish I could say those are all the versions. But they’re not. There are many, many more.

I am curious about something though.

Have you listened to every version I posted? Do you feel like you’re going insane yet?

Good, good. Then my plan is working.

Notice, if you will, while you wash the dishes later. What’s that song you’re humming? And as you try to fall asleep tonight, what tune is keeping you awake?