Based on the first Retro-graphic Evidence article, I think we can all agree I have a shaky grasp on what is cool.  Chanting TMNT lyrics in the school yard?  Come on, young Tony!  You’re better than that!  As it turns out, I was better than that, because around the same time this photo was taken: 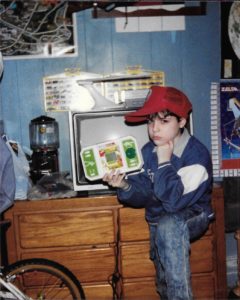 Note the subtle squinting of the eyes.  The slight pout.  The fist jacked up under my chin.  Oh yes.  I was really demonstrating my cool-guy prowess for this shot.  I even cocked my hat off to the side: an authentic street-tough.  And if my carefully situated pose and acid wash jeans weren’t enough to telegraph my ultra-rad awesomeness, I displayed a handheld video game for the world to behold in quiet awe.

Take that, ya old squares!  I’m a kid of the eighties, and this is what it means to be cool.

Of course, had I been at all observant or self-aware, I’d likely have noted my father snickering as he took the photo.  My mother was no doubt peeking around the corner of my bedroom door, basking in the light of her adorable son.  Awww, look at the little guy trying to act tough, holding up that new baseball game we bought him like it’s a trophy.

And to me, I guess it was.  When I was younger, I spent most of my time outside.  As much as I love toys now, back then we mostly rode bikes, went to the park, fished, caused trouble, and generally had a great time of it.  Sure there were the video games and action figures, but they were like the cherry on top of an already great day.

Still, I had my fair share of stuff, as you can see in the photo.  I wouldn’t be surprised if I had carefully placed these items just for the picture.  Behind me I have my two Micro Machines display cases, filled to the brim with cars and planes.  These treasures, I’m happy to say, I still own.

On top of the television is the Nintendo, and of to the side you can even see a game, waiting to be played.  Off to the right there’s a glimpse of a Zelda poster, and above me, just out of frame, my trusty Red Rider BB gun (more on this in another article).

My favorite novelty of this photo is actually those little colored beads attached to the spokes of my bicycle tire.  Those strange trinkets and a baseball card situated to rub against the spokes as I rode were the only adornments I ever had on my bike.  They probably made me a target of some kind to the other kids in the neighborhood, but I loved the noise and spectacle they created just the same.

Kind of like getting all dressed up and posing for this picture.  Sorta like singing cartoon songs in the school yard.  Being a kid was great because rarely did I deprive myself of fun or happiness due to what other people might think.

It’s a state of mind I miss, and something I strive for every day.  I think I’ll start carrying around a hand-held game to bust out any time a camera makes an appearance.  I’ll even shout, “Video games are cool!” as I break into a Captain Morgan pose.

2 thoughts on “Video Games are Cool!”