Writing and Pumpkins and Turtles, Oh My.

Let us go in order. Writing.

A couple days ago I received a hold notice for my story “Stanley.” The magazine in question (I won’t reveal that until I have final word–I’m not sure why–though I will say it’s one I subscribe to and have wanted to break into since its inception) has short listed the story for further consideration. *Happy-Dance*.

A word on “Stanley.” The story is about a dog. I have trouble calling this short tale “horror,” but maybe it fits into the “suspense” category. Or possibly “dark humor.” Either way, my point is I had thought it’d be a hard sell. As it turns out, it’s gotten a pretty good reception so far.

My first choice for submission is the magazine where it’s being held now, but since this particular magazine wasn’t open to submission at the time, “Stanley” first went somewhere else.

This other magazine (which I think if you dig through my old posts, you can find the name of) also held the story. When they finally rejected it, they sent a very nice, long e-mail about how much they loved it and how they only rejected it due to the theme not fitting with the other stories.

It’s strange. This story, one I thought would be nearly impossible to place, is doing so well. I’m proud of the little guy, holding his own out there in the big bad world of slush piles. My theory? Editors, of even horror magazines, can’t resist a good dog story. 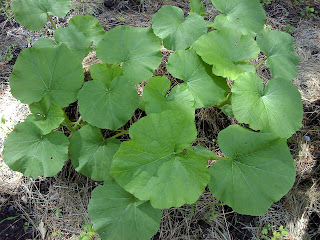 Not much here except to say, “Hey, look at my pumpkin vines!”

Driving home, my parents found a big old snapping turtle in the middle of the road. They saved him from a possible squishing–though this big guy would more likely have caused any driver silly enough to run over him to lose control and hit a tree–and brought him to the house for a quick photo op. After which we brought him to a cozy lake and sent him on his way. 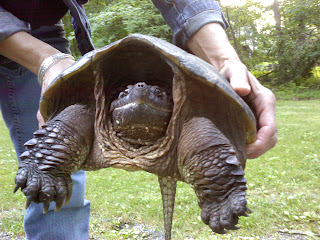 There’s probably more junk, but that’s enough for one post.

4 thoughts on “Writing, Pumpkins, Turtles and Junk. Or…”